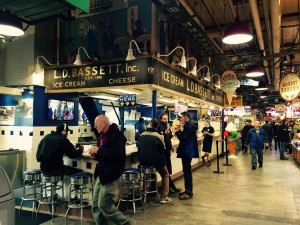 This past weekend we finally had warm weather! Although I did enjoy the powdery wonder that is snow, it got real old real fast. Snow days are a thing of the past once you’re in college, and the mounds of snow everywhere loses its appeal when you have to trudge through it to go anywhere. A few weeks back, we at SEPTA Youth Advisory Committee got really tired of the cold. To solve our woes and maybe coax the warm weather (after we were betrayed by Puxatony Phil…), we decided to get ice cream! We like to believe that it was our early ice cream eating that caused the nice weather the past two days,
and we plan on eating much more ice cream to keep the sunny days coming! So take your eligible passes (independence, monthly, and weekly passes) to Reading Terminal Marke 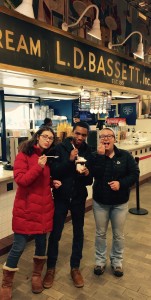 t and buy yourselves some frozen deliciousness at Bassetts Ice Cream! Bassetts is currently part of Pass Perks, and they are offering 10% off of your order until June 7th!
Reading Terminal Market is right across the street from Jefferson station. I took the Manayunk/Norristown line from East Falls to Jefferson Station. I then followed the signs to Reading Terminal Market located throughout Jefferson Station, walked up the steps, and there the Market was! Jeff, coming from University of Pennsylvania, took the Market Franford Line from 40th station to 13th station
and walked a block to Reading Terminal Market. Ellie and Jason, our two non-YAC guests from the Philadelphia Science Leadership Academy, took the 125 Bus from the corner of Market st and 22nd st to the corner of Market st and 13th st. After we all congregated at Bassetts, we had to make some tough decisions—chocolate or rainbow jimmies?

Ellie, Jason    , and I decided to split a sundae. When you order a sundae at Bassetts, you get to pick two flavors of ice cream and 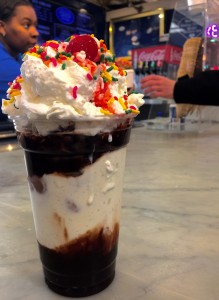 THREE toppings (whipped cream is included!). We went classic—chocolate and vanilla ice cream with whipped cream, hot fudge, rainbow jimmies, and peanuts. Is that classic? Who knows, we were sugar hungry and it sounded good. Jeff was sick, so he went for two scoops of chocolate ice cream with rainbow jimmies. In hindsight, I think that Jeff had the right idea with his own ice cream because when there is a cup of hot fudge and ice cream no one is sharing. If you’ve never had Bassetts Ice Cream before, I highly highly recommend it. Did you know that it was voted best ice cream on planet Earth? Okay well not really, but it’s definitely the best in Philadelphia! Bassetts has been around since 1861, my friends. That equals amazing ice cream. I heard that the Pope only came to Philadelphia because of Bassetts. Okay, also not true, but you should really check it out. Pick up an 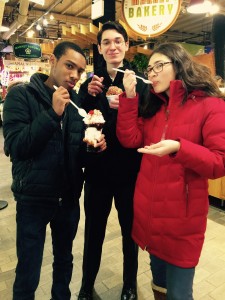 independence pass when you need a break from studying and smother that midterm stress in hot fudge and ice cream!